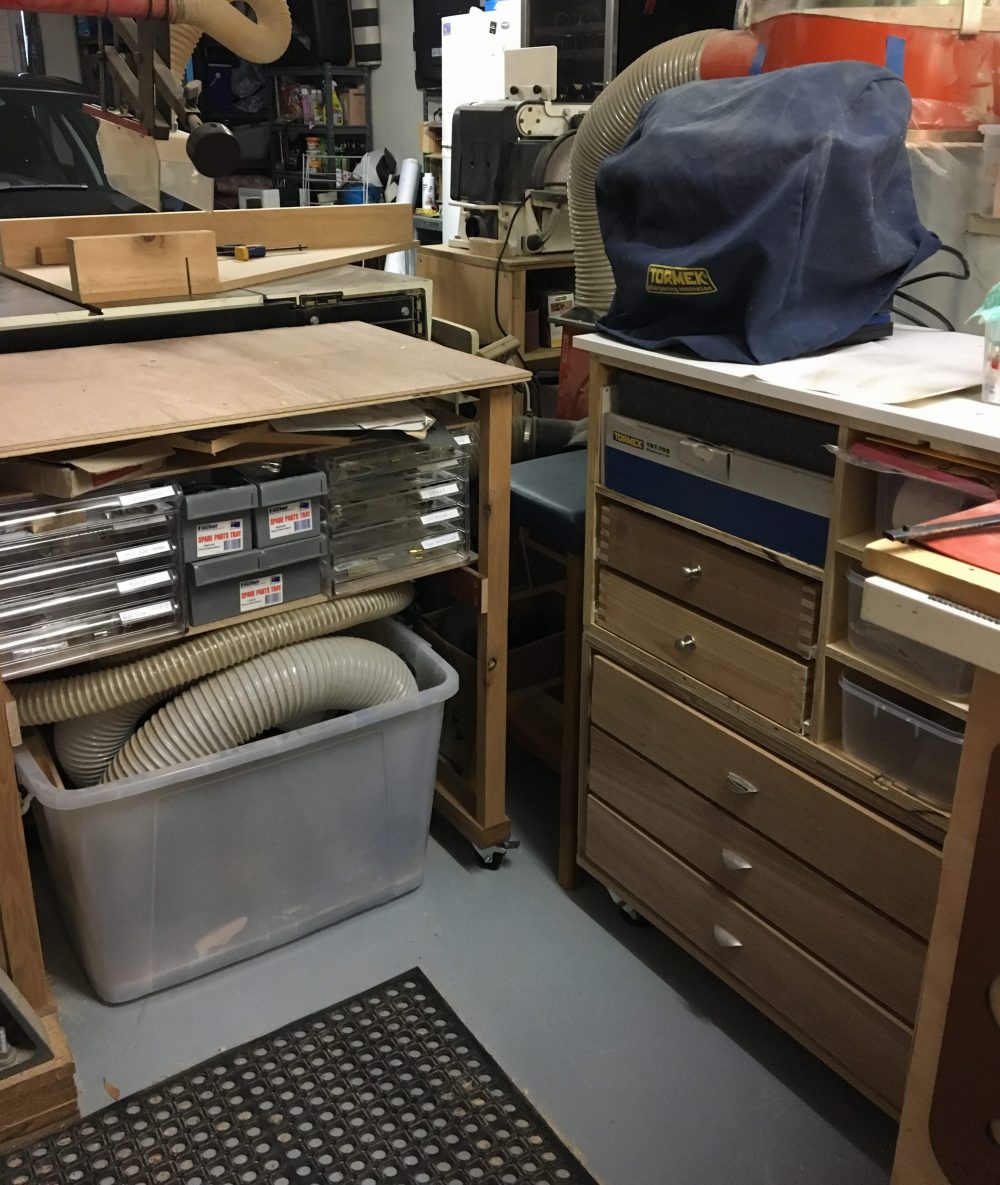 Some old and new projects completed over the Easter break and last weekend.

The main problem with this is that they fall over and are hard to get to at the back. She has tried stands to separate the files but with limited success.

I suggested using additional drawers with a gap so the files can stand up – I thought it wouldn’t take that long and unfortunately said it out loud!

I bought two heavy duty full extension slides and ended up making two new drawers plus moving one from the bottom. I have had an old iron in the garage since we moved in (over 6 years) and this is the first time I have used used; it got a lot of use with the veneer strips.

Used blue painters tape over the proposed cuts with the table saw and this worked well with minimum chipping.

Works well and she is happy with the result!

Also decided to reorganize  my woodturning storage and incorporate a practical solution for my Tormek grinder where it wasn’t a mission to get out and use. I don’t sharpen as often as I should and this is one of the reasons (the main one of course is that I am lazy).

Was re-purposing a plastic cat litter tray but this was an awkward shape so that was the first thing to go – it did hold quite a lot though!

I couldn’t go too high as I have a sliding tape on my JET Supersaw  and also need to have dust extraction ducting running between this and the table saw to the lathe on the left.

Also needed to keep the hoses handy that are used for the sanders and other portable tools.

The stand below was already re-purposed and then I added the trays I bought last Christmas to keep my pen turning bushes in; as with most turners I have too many pen variants and they must be kept separate and easily identifiable.

As you can see below I created a stand above the hoses for pen turning blanks and bushes, it also has space under the top for my painting lazy-susan . The stand just fits under the sliding table saw and will function as a basic out-feed table.

Also now have room for my step stool between the two stands.

The stand on the right as shown fully below now has the turning chisels in the bottom three drawers and Tormek accessories handy below the grinder.

I have not used the re positioned grinder yet but after trying to turn a cast ring at the weekend with blunt tools (I stopped after trying five tools!) the time has come for a major sharpening effort.

Overall very happy with the result of my Easter projects (even though they took a bit longer)  and without testing the grinding setup.

GaryI am an accountant who uses woodwork as a way to escape computers. I work in the back half of a tandem garage under the house; effectively a basement that also houses my wife’s car. I have a reasonable set of tools and am getting more into hand tools, mainly due to the lack of noise and dust minimization. I live in Sydney Australia and am a active member of The Shire Woodworking Club, Cubby House Turners & Woodies Inc and The Traditional Tools Group Inc Why Hugo’s Woodshop? All decent website options with Gary were taken so I had to look for something else! Hugo is our 3 year old Ragdoll cat who is very nosy and likes investigating the garage / workshop:
Posted in:
General, Wood Turning, Workshop
Tagged:
Featured, projects for wife, woodturning, woodworking, workshopcleanup