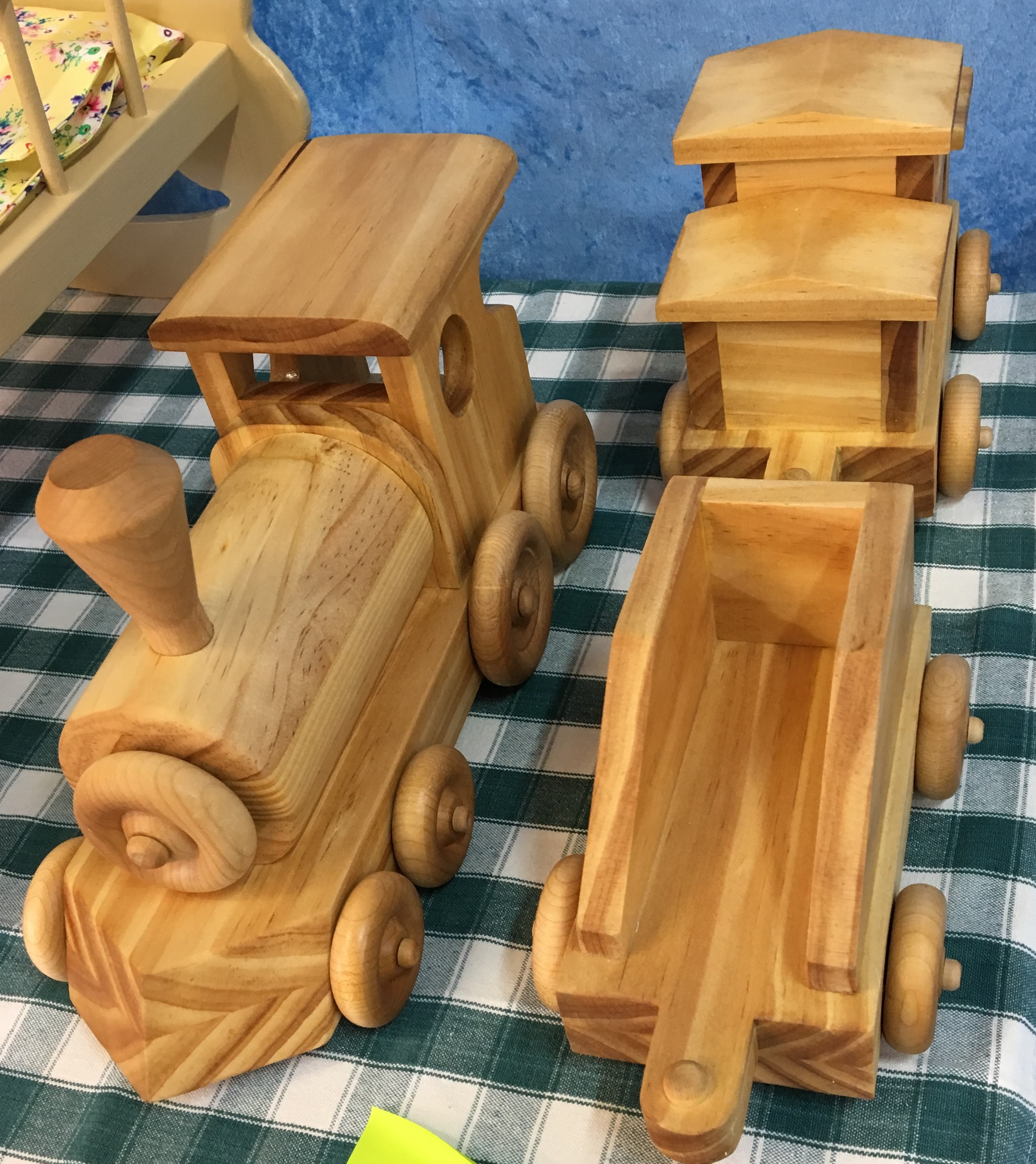 This was my entry in the 2017 Shire Woodworking Club pine plank competition:

The main rule is:

There is no restriction on the number, size, type and design of the entry providing it is used to make one or more toys for the Club.

It is to be made predominantly from the timber supplied.

Quite a while ago I had bought a set of full size train set plans from toys and joys which included all the wheels, axles and smoke stack.

This is what the plans were for:

As I have a lathe I decided to turn the boiler but otherwise use the plans as is.

Only 2 real issues found with the plans:

An issue caused by me was turning the boiler totally round; I then needed to cut a slice off the bottom to attach it to the base. I shouldn’t have glued the last piece of the blank.

This is a photo of my jig for the table saw.

I also used double stick tape to make both sides of the caboose equal.

Mostly used the sander for the roof sections but the cab roof was too big for the sander so had to use a plane then hand sand.

Some in progress shots

Experimented with finishes on a standard sanded piece plus the offcut from the boiler as this was sanded on the lathe to a higher level.

Ended up using danish oil and two coats of wipe on poly. The garage stunk for a week after applying the danish oil; it takes ages to cure fully.

Also applied danish oil on the wheels but only one coat of poly.

Managed to lose one peg before gluing in the wheels; luckily I had a plane set from toys and joys so I used that.

Quite pleased with the final result.

The length is 85cm or 24in so quite substantial.

Not sure if I will make any more to sell as this one belongs to the club as per the rules; very difficult to price as a lot of work involved.

GaryI am an accountant who uses woodwork as a way to escape computers. I work in the back half of a tandem garage under the house; effectively a basement that also houses my wife’s car. I have a reasonable set of tools and am getting more into hand tools, mainly due to the lack of noise and dust minimization. I live in Sydney Australia and am a active member of The Shire Woodworking Club, Cubby House Turners & Woodies Inc and The Traditional Tools Group Inc Why Hugo’s Woodshop? All decent website options with Gary were taken so I had to look for something else! Hugo is our 3 year old Ragdoll cat who is very nosy and likes investigating the garage / workshop:
Posted in:
Shire Woodworking Club, Wood Turning
Tagged:
plank competition, shire woodworking club, Toy Donations, Wooden Toys, woodturning, woodworking