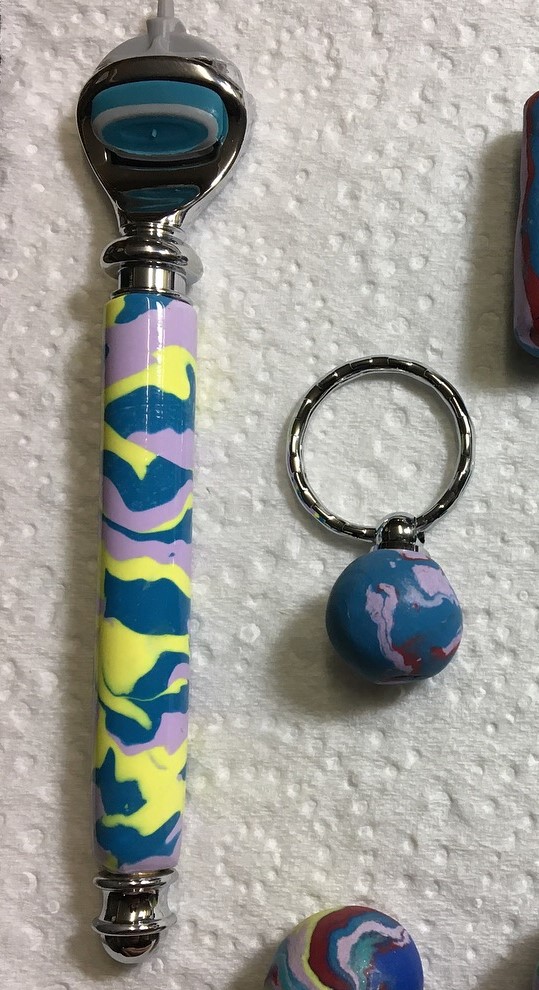 I attended a Polymer Clay workshop at the local community college last weekend; I couldn’t pass on the 60% course discount!

Nadine from Own Sweet Time was the tutor and had thought only 5 would attend but 10 of us used the last minute discount to register.

The class was mainly about Jewelry but I took along some pen, razor and key ring tubes to see if they would work.

Nadine also sent very detailed notes regarding everything she covered with appropriate links.

What was interesting were her examples of tools available that were totally unnecessary, either initially or could be substituted for common products like rulers and baking cutters. She had examples of these to try which was very good.

These are some examples the tutor brought along, the second photo  one is interesting as the middle 4 beads have exactly the same clay but are just mixed together more.

These are my practice pieces; quite a bit harder than it looked.

These are my attempts the attempts, the razor in the first photo has been finished on the lathe; the second photo show what it was like before finishing.

I was quite pleased how it turned out both in the colour mixing and the finish. The bottom 3 are not baked, the one on the left is a mix of the clay I had left which came out all right.

The key ring is ok but would improve with a finish, not sure what to do at this time.

These are the attempts by the students (including mine). We were able to choose 6 colours each initially and these are the results.

This small oven was all we were using in the class but it did have ceramic tiles inserted to regulate the heat better; Nadine said that she uses her oven at home! Not sure that my wife will be too keen on this though.

I tried to tidy the pen blank on the lathe but was not a success! This actually happened while wet sanding which I thought was strange but must have cracked it while turning

Will try and fix it.

I have quite a bit of clay as the leftovers were available to take but as they are a fairly soft clay they have limited use but I intend to make some cufflinks and keyrings.

GaryI am an accountant who uses woodwork as a way to escape computers. I work in the back half of a tandem garage under the house; effectively a basement that also houses my wife’s car. I have a reasonable set of tools and am getting more into hand tools, mainly due to the lack of noise and dust minimization. I live in Sydney Australia and am a active member of The Shire Woodworking Club, Cubby House Turners & Woodies Inc and The Traditional Tools Group Inc Why Hugo’s Woodshop? All decent website options with Gary were taken so I had to look for something else! Hugo is our 3 year old Ragdoll cat who is very nosy and likes investigating the garage / workshop:
Posted in:
Polymer Clay, Wood Turning
Tagged:
woodturning, woodworking